“I walked in to LifeFuels thinking I was going to get a quick tour,” Toelle said. “I was job hunting, but I didn’t realize I was walking into something I would be so invested in two and a half years later.”

Justin Toelle, B.S. Biochemistry ’15 visited the LifeFuels office in Reston, VA in the spring of his senior year. He was impressed with the startup’s developing product – a portable smart bottle that dispenses concentrated flavored/functional pods to make beverages on the go. The bottle also tracks hydration and leverages Bluetooth to connect to the user’s smartphone and wearable fitness tracker to monitor both intake.

Toelle, a Loudoun County native, was home for spring break when he reconnected with a childhood friend. He did not realize he was also launching a career with a budding entrepreneurial venture.

“I walked in to LifeFuels thinking I was going to get a quick tour,” Toelle said. “I was job hunting, but I didn’t realize I was walking into something I would be so invested in two and a half years later.”

Just days following graduation, Toelle, a biochemistry major and chemistry minor, joined the staff of LifeFuels full-time. The Reston-based company was co-founded by CEO Jonathon Perrelli, B.S. Finance ’95 and funded in part by the VT Investor Network, which is facilitated by the Apex Center for Entrepreneurship at Virginia Tech.

Perrelli and his team of electrical and mechanical engineers, industrial designers, software developers, and business and finance types consulted with dieticians, nurses, and doctors to design their smart water bottle. 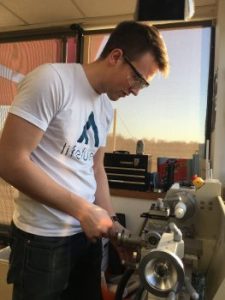 However, LifeFuels had a gap to fill and needed a critical team player. In the National Capital region, rich with workers from fields of technology, government services, and software, Perrelli needed someone with a biochemistry background to explore and test consumer products. LifeFuels co-founder and CTO Rob Lawson-Shanks was pleased to introduce Hokies Perrelli and Toelle in 2015.

“We considered relocating someone with previous beverage industry experience but decided to hire a team player who could learn with us from the ground up,” Perrelli said. “Justin [Toelle] has outperformed every expectation in his role.”

Perrelli serves on the Apex Center’s Founders Circle and Advisory Board. He is a strong proponent of the Center’s mission of inspiring students to put their passion, purpose and ideas into action.  He’s also outspoken about the goal of the Apex Center: to make Virginia Tech the number one entrepreneurial community in the world.

“Before the Apex Center, we didn’t have an ecosystem or a platform to bring together alumni, entrepreneurs, angel investors, mentors, and undergraduates who want to learn about entrepreneurship, or professors who had the expertise to teach entrepreneurship,” Perrelli said. “Although we did not have these resources when I was an undergraduate, it is wonderful that we have a strong and growing ecosystem today and I am grateful to be a part of what the Apex Center is building at Virginia Tech.”

The power of the network

LifeFuels Senior Director of Engineering Mark Lyons “really took Justin under his wing and helped him as an individual and as an employee,” Perrelli said. “We were very fortunate that Justin had a fantastic mentor in his boss, and their success working together is one of the reasons we have advanced a complex platform of the LifeFuels bottle, fuelpods, and app.”

Toelle’s position has evolved a bit since 2015 when he was hired as an analytical chemist. Toelle initially conducted chemical tests on the beverage mixes and FuelPods, but now, as Applied Sciences Lead, Toelle is more focused on product development and quality assurance for the LifeFuels bottle.

Toelle uses that background to conduct an evidence-based framework of quality assurance and quality control at LifeFuels.

“I can draw up a procedure to test a feature or understand a product issue and do it in a scientifically vigorous way,” Toelle said. “I have Virginia Tech to thank for the commitment to that rigor.”

Perrelli said Toelle has taken on a leadership role in guiding others who have been in the field longer than he has.

“Justin [Toelle] is driving decisions that are helping to bring our product to market,” Perrelli said.

The LifeFuels Bottle has been in beta testing since Fall 2017 and will be available nationwide in 2018.